Over the almost five hundred years of history that the capital of the state of Pernambuco has enjoyed, there have been many occasions when the announcement has been made of a “New Recife”. Since the Battle of Guararapes and the various insurrections of the colonial, imperial, republican, dictatorial or democratic periods, there have also been many struggles that have involved the “Povo dos Arrecifes” (the village of the reefs), with the city being the setting for a series of skirmishes, conflicts, resistance struggles and conquests.

Recently, a consortium of construction companies bought a sizeable portion of the land on the Cais José Estelita, the quay situated close to the city’s historic centre. The consortium’s plan is to construct a dozen buildings, each with roughly 40 storeys, similar to those that have sprouted like mushrooms across the city’s landscape since the mid-1990s. With the progressively growing interest of the property market in the city’s historic centre, resulting from the chronic problems of mobility that the city faces on a daily basis, what was once the “figure” – the panorama of Mauriceia portrayed by Franz Post, with its baroque churches, its eclectic 19th-century and modernist 20th-century architecture – has now become the “background”, to use the terms employed by the architect and planner Luiz Amorim.

Close to the Cais José Estelita are several concrete examples of this type of undertaking: ranging from the famous “Twin Towers” (erected almost overnight in a process riddled with irregularities and shady dealings) to the building of the various spikes sticking up in Rua da Aurora, and including several projects for the former favela (slum area) of Brasília Teimosa, on the other bank of the estuary, where in the last ten years all kinds of new towers have sprung up in glass and metal cladding. On noting such apparent dynamism in the property market, the visitor to Recife will certainly ask himself if there really is so much money circulating in the city for people to be able to buy and maintain so many luxury apartments and offices.

Almost always built in pairs, these towers of reflecting glass and aluminium are reminiscent of alkaline batteries stacked on supermarket shelves, whose sales and promotions are also announced in the press and on television. Symbols of a certain vigorous health in the construction industry and the property business in the capital of Pernambuco, these new buildings end up highlighting the contrasts in the landscape of a city that has been living for several decades with a chronic housing crisis, which in the 1970s earned it the epithet of Mucambópolis (a kind of shanty town).

FROM CULTURAL PRODUCTION TO URBAN STRUGGLE

The Manguetown of the 1990s, known today as Hellcife, is the epicentre of a multiple cultural production, which both radiates and welcomes significant expressions, not only for the region but for the whole of Brazil. These cultural expressions are frequently built on tensions and urban conflicts that have become crystallised in different neighbourhoods of the city. Recent films produced by the new generation of Pernambucan filmmakers, such as O Som ao Redor (Neighbouring Sounds, 2012), by Kléber Mendonça, or the documentaries Um Lugar ao Sol (A Place in the Sun, 2009) and Avenida Brasília Formosa (2010), by Gabriel Mascaro, feed precisely upon the clashes that are typical of these urban territories and their frontiers, having as their subject matter the friction existing between discordant visions of the world and their consequences in the urban space. These are episodes of an incredible saga of men-crabs fighting against the sharks of property speculation, a story that opposes different projects for the city and antagonistic interpretations of the landscape and of what is considered to be historical and natural “heritage”. It is a conflict that today reaches the geographical and political centre of the city, giving rise to issues relating to land ownership, the economy and town planning.

It was in this context that the Ocupe Estelita (Occupy Estelita) movement came into being, organised in 2012 to question the “New Recife” project and to prevent the demolitions of the warehouses that occupy the quay, surreptitiously begun by the construction companies in the early hours of one morning in 2014. Their demands seem to be as fair as they are simple: to create channels for the participation of the local people in the dynamics of the city’s construction, normally monopolised by the major construction companies, which are sometimes associated with the public power through intricate schemes of bureaucratic trickery. By promoting the physical presence of the population, in keeping with encampment models inspired upon foreign occupation movements, the activities proposed by the Ocupe Estelita movement ended up leading to unaccustomed encounters between the region’s impoverished inhabitants and the ephemeral occupiers, who organised open classes, workshops, debates, concerts and shows. These residual spaces, which previously did not normally form part of the everyday life of the citizens of Recife, suddenly gained a whole new lease of life. The Ocupe Estelita movement promoted a meeting between the middle classes, the city’s professional business people and the universities, and the local population, with the aim being to think about an alternative project for the warehouse area on Cais José Estelita and the railway shunting yard, claiming their “right to the city”.

The main innovation in the form that this struggle took was perhaps the fact that it counted with the active collaboration of both lawyers and town planners. This brought the conflict into the “legal” arena, using the limits and the characteristics of the law as a weapon, this time on the side of the popular demands. In this way, they managed to obtain expressive victories, while also helping to take the debates beyond the restricted circles of the city’s professional classes. Consequently, what amounted to specialised arguments between engineers, town planners, architects, politicians and other technicians in the service of private or public companies was widely shared and publicised. The most diverse camps proved capable of producing critical approaches and ideas centred around the unfeasibility of this “New” Recife. This debate, now available online through the Direitos Urbanos (Urban Rights) platform, is impressive because of its consistency, which probably also had something to do with the fact that it enjoyed the collaboration of various teachers, activists and intellectuals involved in town planning in the broadest sense of the expression.

A CITY FOR EVERYONE

The conflicts haven’t ended: while the group of construction companies seems to have joined forces with the city council in order to ensure that the project will go ahead, the Ocupe Estelita movement has the support of the Federal Prosecution Service and the bodies that safeguard the Historical and Cultural Heritage in order to try and preserve the right to the landscape and to the various monuments situated in the vicinity. One of the fundamental appeals that the activists depend upon is the request for the listing of the railway yard, the railway lines and all the equipment that provides material testimonies to the implantation here of Brazil’s second railway, dating from 1855-1858, as places/objects of public interest. At the same time, the recent statement by the city’s mayor, that there was no room for “sulking” and that the project would definitely be “going ahead” highlights the compromise that already exists between the local politicians and this mercantilist project for the city. The Federal Prosecution Service considers it to be “premature and inopportune” for the City Hall to have approved the government bill for the area, given the importance of the historical heritage that is at stake and the environmental impacts of this pretentious initiative.

Amid the great turbulence of the economic and political crises that have brought such turmoil to Brazil, including the corruption scandals surrounding the financing of election campaigns by the large construction companies, which in return expect to receive favours and convenient opportunities at a later date, nothing seems to be clearly defined in the panorama of the city of Recife. Although the history of the capital of the state of Pernambuco shows that there have been many occasions on which the radical transformation of the landscape of this tropical metropolis has proceeded in the most tortuous ways, the next episodes in this intricately complex soap opera have yet to be written. The originality of the Ocupe Estelita movement is becoming a reference point for urban struggles, and citizenship is gaining ground in Recife.

586 One day after the Ocupe Estelita movement’s first action, someone erased the phrases written by the activists, but the conflict still goes on. Photograph by Direitos Urbanos/Divulgação. 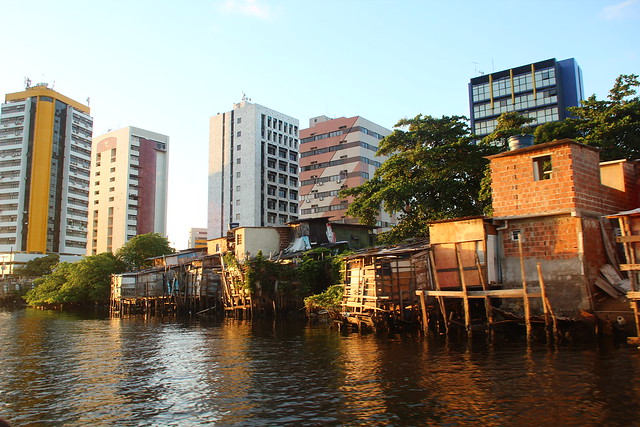